Happy new year and thank you for taking the time to stay updated on the Foothill Gold Line project. Following the temporary slowdown of work caused by the recent heavy rains, crews are once again back at work making great progress throughout the 9.1-mile project corridor. This month, crews completed the last of the project’s 19 bridges (the largest one on the project, over Lone Hill Ave. in Glendora), continued installation of the light rail track and electrification systems, and began work on the platform for the Pomona Station – the last of the four new stations to start taking shape. They also continued work on the final at-grade crossing to complete reconstruction – Garey Ave. – which will be closed to all traffic for 45 days starting next week. Read on for more on these and other activities: 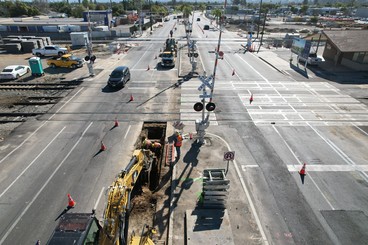 At the end of 2022, crews had completed reconstruction of 20 of the 21 at-grade crossings from Glendora to Pomona. While some work was completed last year under lane closures, only the Garey Ave. crossing in Pomona had yet to undergo major, long-term reconstruction activities. But that will soon change.

Next Wednesday, February 1, crews will begin a 45-day full closure of Garey Ave. at the railroad crossing (north of Arrow Hwy.) to install new light rail tracks, relocate the freight track, complete underground utility work, make safety improvements, construct new medians and rebuild the roadway. As seen in the photo above, crews are currently carrying out work within the median to protect a sewer line within Garey Ave. ahead of the full street closure starting next week.

NOTE: While the most impactful reconstruction activities are completed at the crossings, crews will return to many crossings throughout this year to complete remaining work. Some crossings will experience short-term full, directional or lane closures (including current activities mentioned below).

Ongoing Closures, Restrictions at Crossings in Glendora and San Dimas

Currently, crews are working at several crossings along the project: at the Foothill Blvd./Grand Ave. intersection, Route 66 (between Compromise Line Rd. and Hunters Trail) and Lone Hill Ave. in Glendora; and at the Bonita Ave./Cataract Ave. intersection in San Dimas. Each requires partial closures and/or temporary restrictions to allow crews to complete their work. More details below. 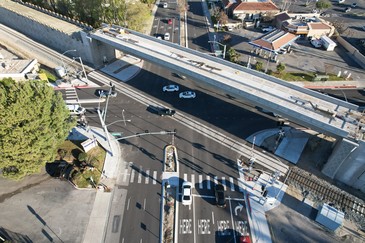 While vehicle and pedestrian movements are fully open at the Foothill Blvd./Grand Ave. intersection (as seen in the photo above), crews will continue to work at the intersection to complete the sidewalks, medians and landscaping. These activities will require intermittent lane closures through June 2023. For more information, click here for the notice. 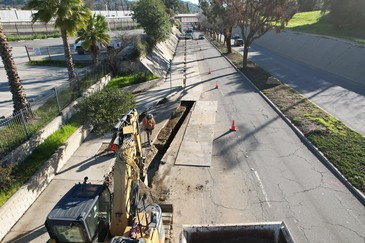 Along Route 66 between Compromise Line Rd. and Hunters Trail, crews will be continuing to implement intermittent lane closures through December 2023 to complete work on the roadway, medians and curbs and gutters (as seen in the photo above). For more information, click here for the notice.

At the Lone Hill Ave. crossing, crews are nearing completion on a series of nightly full street closures that have allowed them to remove the falsework and towers that were supporting the newly-completed light rail bridge while it was under construction (more on the bridge below). Nightly full closures are ending this week. For more information on the nightly full closures, click here. 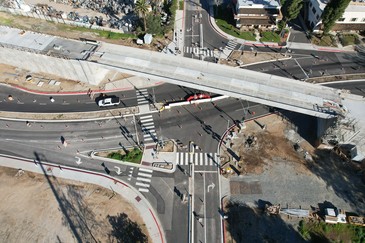 The Bonita Ave./Cataract Ave. intersection in San Dimas, although now open to motorists and pedestrians, continues to be under a temporary lane configuration with restricted movements to allow crews to safely complete the remaining work on the traffic signals, street drainage and road paving. The temporary restrictions will continue through February 28, click here for more information.

With the recent completion of the new Lone Hill Ave. flyover bridge in Glendora, crews have now completed work building or renovating all 19 project bridges from Glendora to Pomona – a major milestone for the project. Some of these bridges are for the freight system, while others are for the light rail system. Most span small waterways or channels, but four are new light rail bridges that will take trains over major city streets in Glendora and San Dimas. Although these bridges are completed, crews continue to work on top of the bridges (such as installing light rail tracks), as well as constructing the approaches on both sides. Below are updates on these four major new light rail bridges (from west to east): 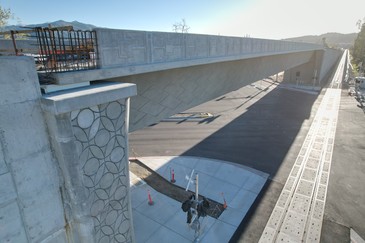 With the new light rail bridge over Foothill Blvd./Grand Ave. in Glendora complete, crews are now focused on constructing the approaches to the west and east. As seen in the photos below, crews are constructing the retaining walls for the approaches, which consist of panels that feature custom design patterns. When completed, each approach will measure approximately 1,200 feet long. 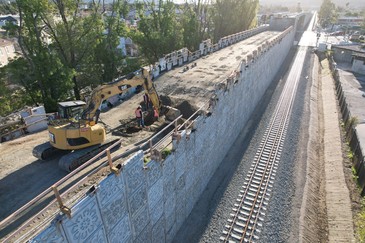 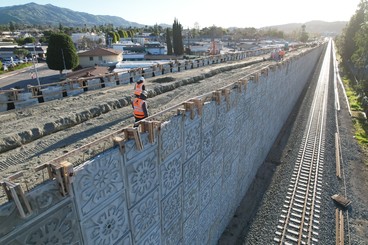 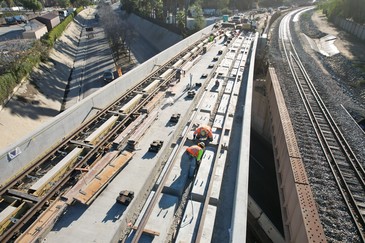 As seen in the photo above, crews are currently installing the light rail tracks across the newly-constructed light rail bridge over Route 66 in Glendora. You may have noticed in the photo that the light rail tracks across the bridge are constructed in a different manner than the tracks within the mid-blocks. While the light rail tracks within the main rail corridor are installed on top of layers of sub-ballast and ballast rocks, the tracks over the bridges are fixed directly onto the bridge deck without those layers – a method called “direct fixation.” This design frees the bridge from having to carry the enormous weight of the layers of sub-ballast and ballast. The Route 66 bridge is the first of the four new light rail bridges over major streets to start track installation. 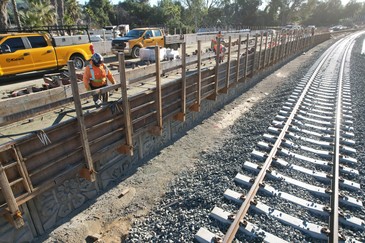 To the east, crews continue to construct the retaining walls for the east approach to the bridge, as seen in the photo above. 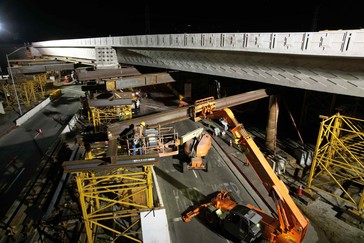 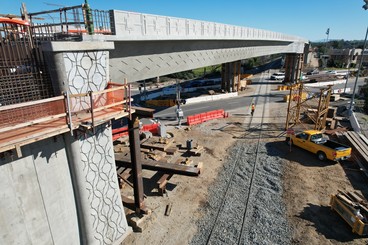 Measuring nearly 350 feet in length, the Lone Hill Ave. bridge is the largest of the 19 bridges being built from Glendora to Pomona as part of the project, and was the last one to be completed. The flyover bridge, which will allow freight trains to change positions within the shared corridor while crossing underneath, was recently completed; and crews are currently utilizing nighttime full street closures to remove the falsework and towers that temporarily supported the bridge as it was being constructed (as seen in the photos above).

With the bridge completed, crews will soon continue work on the approaches to the west and east. 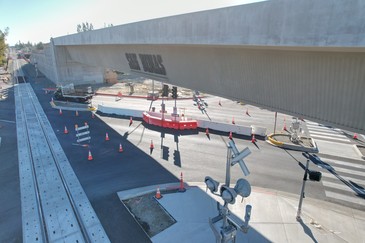 Crews continue to be focused on constructing the approaches to the west and east of the completed light rail bridge over the Bonita Ave./Cataract Ave. intersection in San Dimas, as seen in the photos below. The west approach will stretch from just east of Eucla Ave. to the bridge, while the east approach will go from the bridge to just west of San Dimas Ave., bringing the future light rail trains to street level before reaching the future San Dimas station. 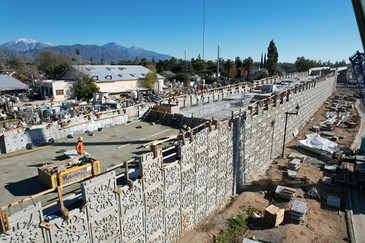 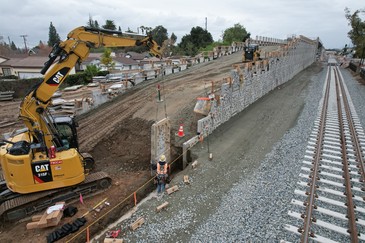 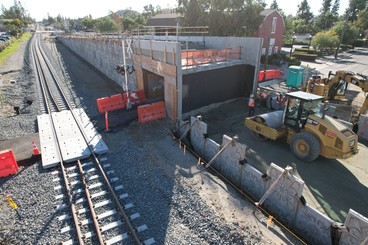 Photos: Crews constructing the approaches to the west (top) and east (middle, bottom) of the completed light rail bridge over Bonita Ave./Cataract Ave.

As shown in the bottom photo above, crews are now constructing the retaining walls for the east approach on both sides of the new pedestrian undercrossing at Monte Vista Ave., which has been open since last year to allow pedestrians access north and south through the crossing.

In addition, crews will also soon begin installing the light rail tracks on top of the Bonita Ave./Cataract Ave. bridge, using the same direct fixation method described above for the Route 66 bridge, in which the tracks will be installed directly onto the bridge structure without needing layers of sub-ballast and ballast rocks.

Crews are currently more than a quarter complete with the four new light rail stations. At the Glendora, San Dimas and La Verne stations, crews have completed nearly all of the platform deck work, while having just begun work on the Pomona station platform. All four stations will be center platform stations, with a track on each side – one for westbound trains and one for eastbound trains. 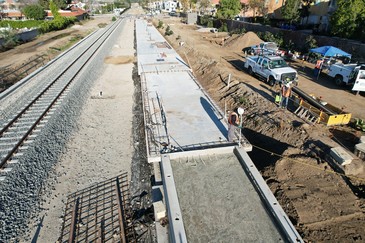 As seen in the photo above, crews have completed nearly all of the work on the platform deck for the future Glendora station. Work currently continues on the station ramps on both ends of the platform. 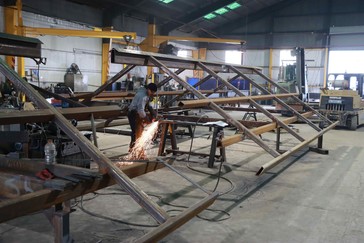 In addition, crews have continued fabrication of the Glendora station canopies at an off-site location (see photo above). When completed, the canopies will be delivered to the station site for installation. 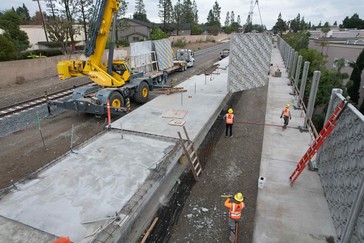 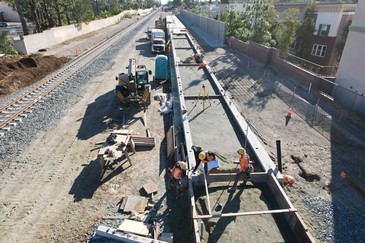 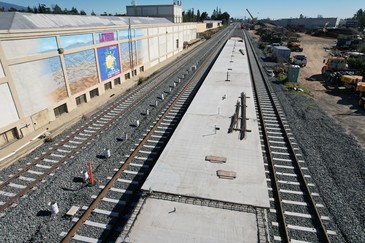 Crews have completed nearly all of the work on the platform deck of the future La Verne station, as well as having installed the light rail tracks on both sides of the platform. Crews will soon return to the station site to resume work. 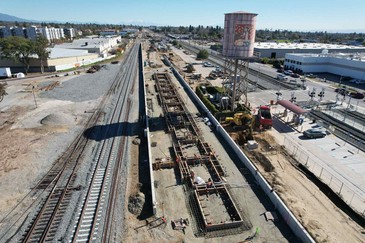 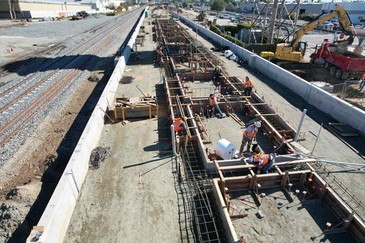 At the site of the future Pomona station, crews have spent the past few months constructing the underground conduit system, as well as retaining walls that provide the space needed to build the new light rail system within the corridor. With that work mostly complete, crews have begun constructing the station platform itself, as seen in the photos above.

As seen in the top photo above, the Pomona station is located just to the north of the Pomona North Metrolink station, and pathways are designed into the project to provide walking paths to easily transfer between the Metro and Metrolink systems.

To learn more about the plans for the future stations, see these fact sheets: Glendora, San Dimas, La Verne, and Pomona.

Crews continue to make progress constructing the various systems that come together to fully make up the light rail system: the light rail tracks, the power system and the train control system. Each requires separate specialized crews and extensive coordination. 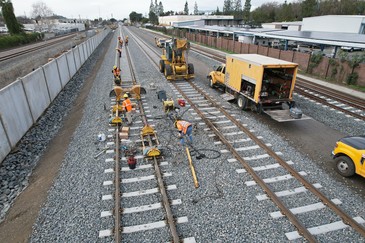 As seen in the photo above, crews continue to install the new light rail tracks throughout the corridor – the majority of which has been completed. 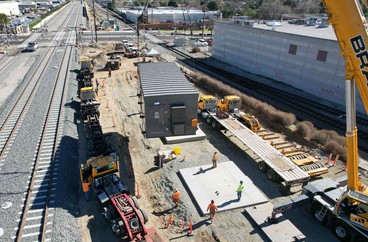 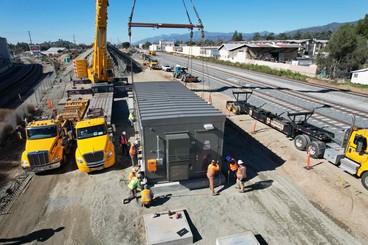 The power for the light rail system will come from the Traction Power Substations (TPSS) that are being installed about a mile apart throughout the corridor. The TPSS converts AC power from the local utility into DC power that then travels through the overhead wires to power the light rail system. Crews this week installed the seventh of eight TPSS on the project, as seen in the photos above. 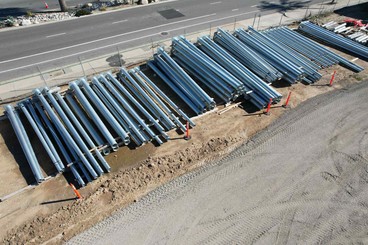 Photo: Crews delivered OCS poles this week to the corridor as they prepare to start installation next month

Crews this week are preparing to install the Overhead Catenary System (OCS) poles that will carry those overhead power wires, as seen in the photo above. Each steel pole weighs about 1,200 pounds, and are installed about 200 feet apart throughout the corridor. The overhead wires will be installed after the poles are completely installed. 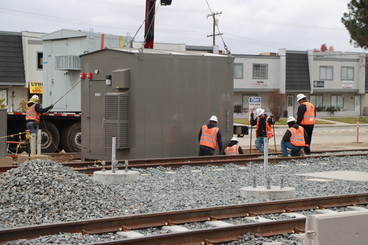 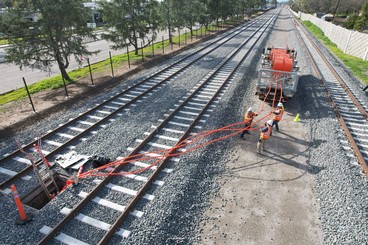 Regarding the Pomona to Montclair project segment, we expect to hear a response in the coming weeks to the full funding grant request submitted last month to CalSTA. The grant application was a joint submission from the Construction Authority and LA Metro, and resulted from the State Legislature setting aside surplus budget dollars last year in the State’s budget for Southern California transit projects. The Foothill Gold Line is one of three priority projects submitted for funding by Los Angeles County, and is competing against other projects from other counties throughout Southern California.

To see more of these and other activities that took place this past month, click here or below to watch the latest project highlight video. 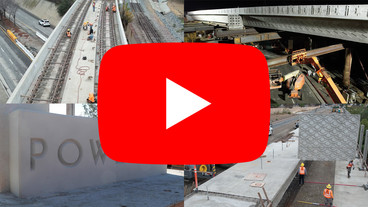 Thank you for your continued interest in the Foothill Gold Line. We appreciate your patience as we build this important regional project.

Take a minute to sign up to receive important updates and the Construction Authority’s monthly e-newsletter!

After submitting your email address using the form below, you will be asked to select specific updates you’d like to receive from the Construction Authority, as well as to provide addtional information such as your name and city.