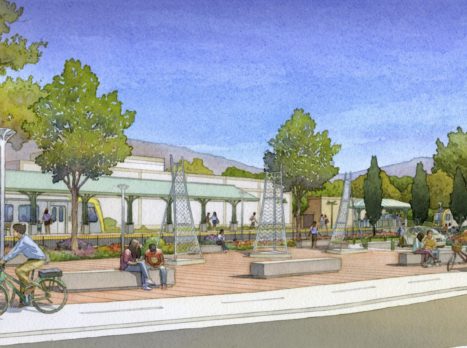 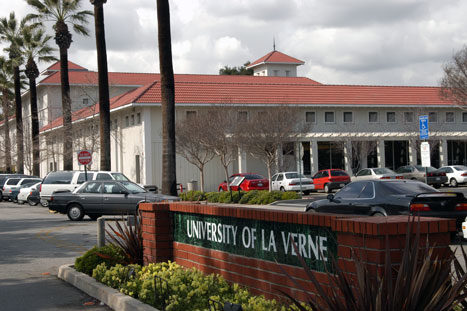 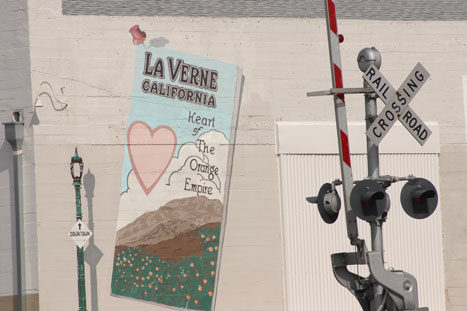 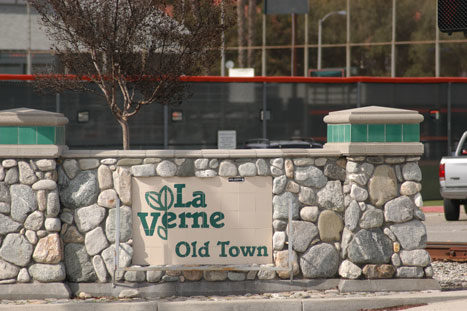 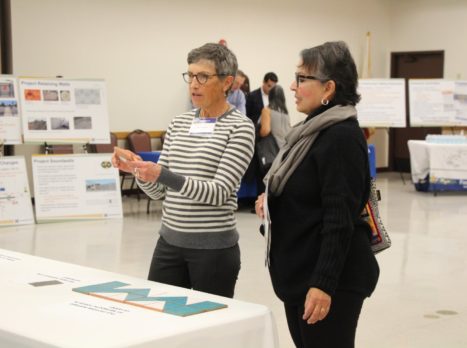 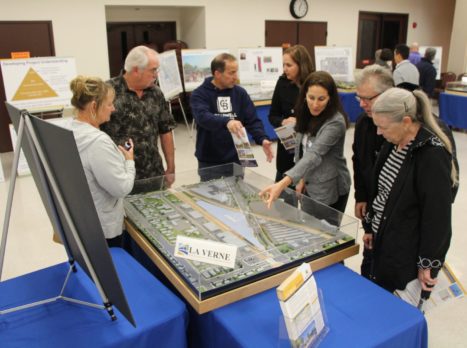 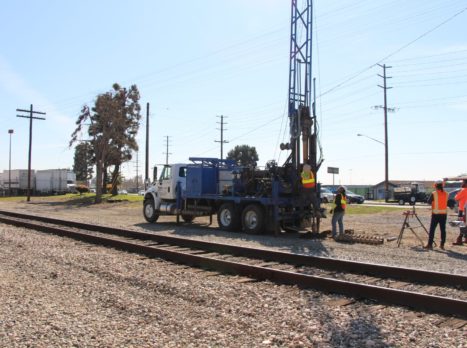 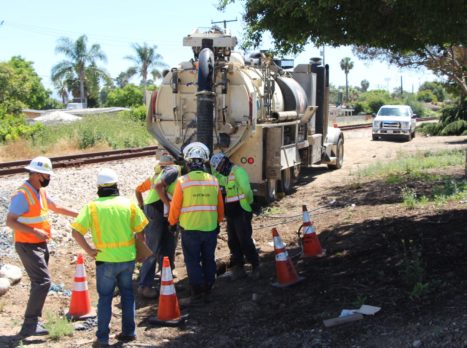 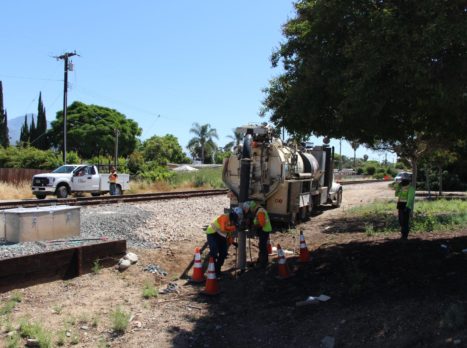 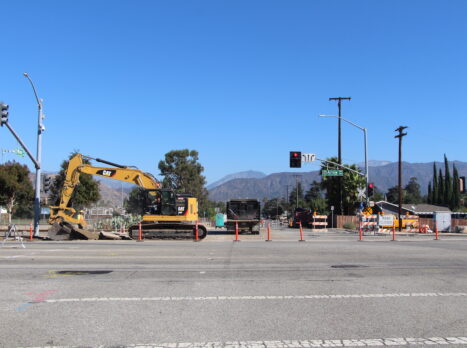 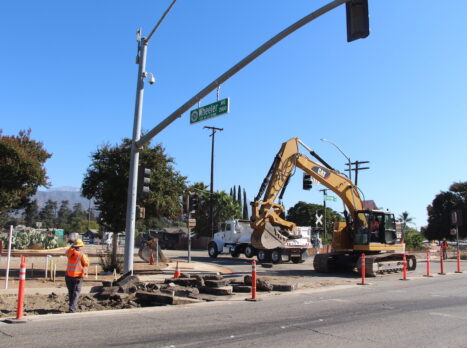 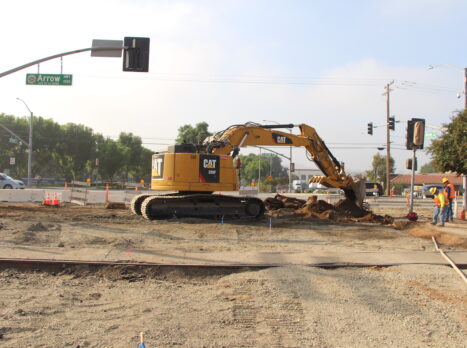 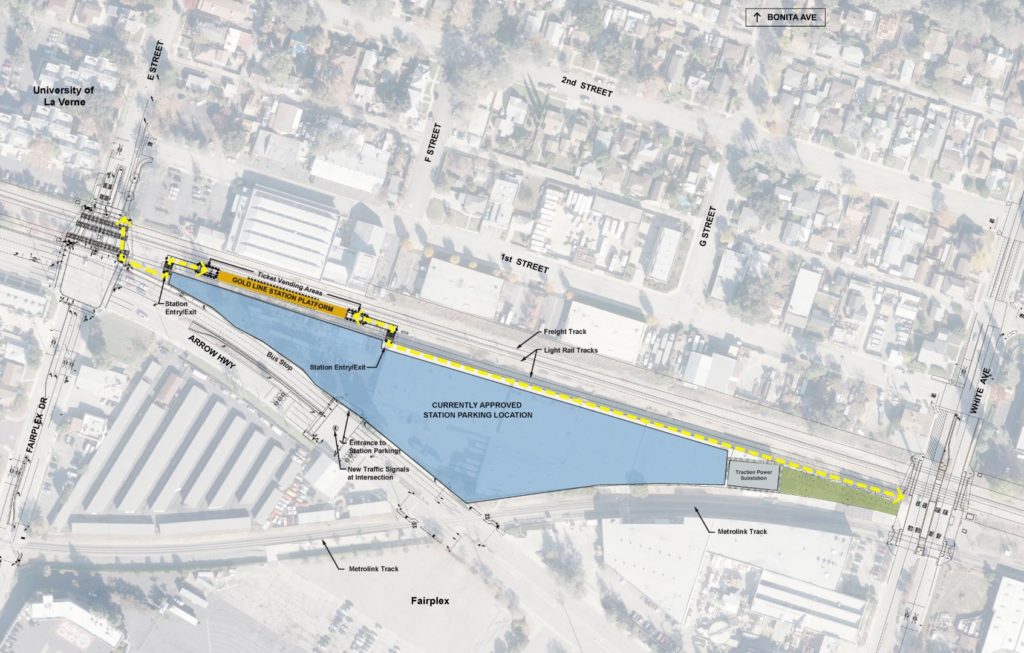 The La Verne station is part of the Foothill Gold Line from Glendora to Montclair, and will be located north of Arrow Highway and east of E Street, between the University of La Verne and the Pomona Fairplex. The station will be a center platform station, with the light rail tracks on either side (one for westbound and one for eastbound trains). The La Verne station will have an associated parking facility, and have amenities for riders arriving by walking, bicycle, bus and drop-off.

Permanent changes will also occur due to the project, including safety enhancements at all street crossings (raised medians, red curbing and turn restrictions within 100 feet of the rail corridor at all street crossings), relocation of the freight track to the northern half of the rail corridor, new fencing and walls along the entire rail corridor, and new overhead lines to power the Gold Line system. The Gold Line tracks will cross White Avenue at street level, and White Avenue will be restriped to add a second northbound lane from the railroad tracks to 6th Street. The freight track will remain at street level.

Blue McRight is an accomplished local artist. Some of her existing commissioned public artwork are a piece titled Luminaries for the California Dept. of Health Services in Sacramento; a light sculpture for the Port of Portland; and artwork for the Staples Center in Los Angeles.

Blue attended Rhode Island School of Design and Evergreen State College. She is the recipient of numerous awards and grants including the Downtown Cultural Trust Fund Grant through the L.A. County Redevelopment Agency, a Cultural Grant from the City of Los Angeles, and two Artist Grants from the Santa Fe Arts Council in New Mexico.

Based on her preliminary design concept, Blue was selected by the city La Verne’s Station Design and Art Review (SDAR) Committee, later ratified by the city council, in 2005. As the Foothill Gold Line from Glendora to Montclair continues to move from planning to reality, Blue has taken her preliminary design concept and work with the SDAR Committee and La Verne community, and advanced the design to be incorporated into the project’s construction.

Blue plans to create three station landmarks, symbolizing the history and architecture of La Verne and the community’s connection to water. The artworks will become engaging landmarks visible from the train station and surrounding streets. A central theme in her art plan is the shared history of citrus and water. The steps of an old orchard ladder, both literally and metaphorically, will create a repeating zig-zag pattern – an ancient symbol of water. This pattern appears in the ceramic tile ornamentation of the Metropolitan Water District’s Weymouth Tower, a landmark in the City of La Verne. The zig-zag shape was also prominently featured as the roofline of the now-demolished La Verne Orange and Lemon Grower’s Association building. An important example of shared infrastructure in the La Verne area is Arrow Highway. This important connector will be symbolized in the artwork by arrow-shaped, colored concrete bases for each sculpture. Each ‘arrow’ will point to one of three important community partners (Downtown La Verne – symbolizing the city; the University of La Verne; and the Pomona Fairplex); thus each sculpture will be oriented in a different direction.

Founded in 1887, La Verne is a city of more than 30,000 residents and boasts a well balanced community with a good mix of residential, commercial and industrial features. The area was for centuries home to a number of Native American tribes whose artifacts have amazed archeologists. Today La Verne is a “close knit” community that is home to many fine institutions and facilities among which include the University of La Verne (founded in 1891), Brackett Airport and an array of highly rated public and private schools. As one of the most desirable communities in metropolitan Southern California, La Verne is a progressive city that has retained much of its small town charm. Long-range planning buttressed by a strategic vision provides La Verne with outstanding services at the lowest cost. With a tradition of planning that can be traced to the 1920s, La Verne today is a leader in municipal strategic planning.