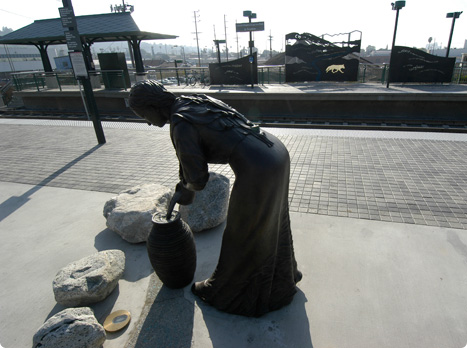 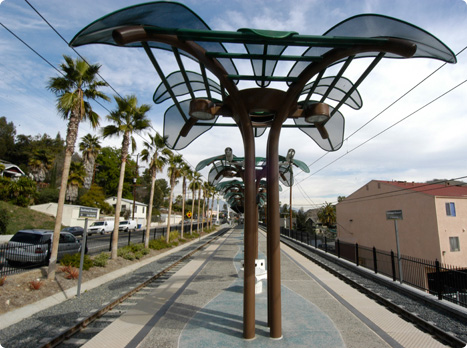 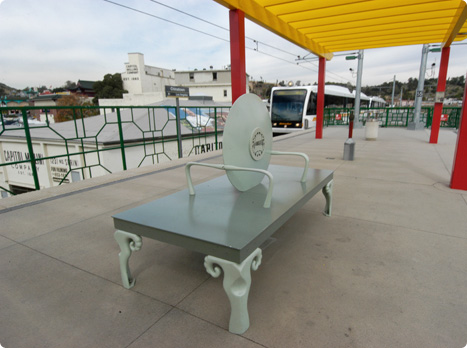 Of the first 13 Gold Line stations built by the Construction Authority in 2003, the city of Los Angeles is home to six. Phase 1 stations in the city include Union Station, Chinatown, Lincoln/Cypress, Heritage Square, Southwest Museum, and Highland Park. Additionally, in 2009 Metro completed work on the first six-mile segment of the Eastside Extension of the Gold Line, adding eight new stations from Little Tokyo to East Los Angeles.

Click on the station names below to go to Metro’s station pages to learn more about each station (including available parking, travel times, bus connections and more). To contact Metro directly, call 1(323) Go-Metro (1.323.466.3876) or 511.

Union Station is filled with many opportunities to experience public art – from the historic architecture of the art deco structure to the numerous art installations throughout the building.
Learn more: http://www.metro.net/about/art/locations/union-station/

Chusien Chang received her Master of Fine Arts from UCLA. She has exhibited her artwork in galleries and museums throughout the Los Angeles area as well as in Norway, Pennsylvania, and New York. Her other works include public artwork in Shanghai, China, and two installations at the Los Angeles River. She has collaborated with numerous artists, performers, and musicians on interdisciplinary projects, and has received several awards and grants.

“I selected the I Ching as the concept for my art at the station because the I Ching encompasses the fundamentals of Chinese philosophy and culture. The I Ching became the basis for Confucian and Taoist thought and today its influence is best seen in the practice of Feng Shui, the concept of the Yin and Yang, and the symbol of the Ba Gua. I thought the I Ching would be appropriate because its influence not only has permeated into all aspects of Chinese culture but it also has influenced western thought and the American culture since the 1960s.”

Cheri Gaulke earned a Master of Arts in Feminist Art/Education from Goddard College in Los Angeles. Early in her career she participated in performance artist Rachel Rosenthal’s Instant Theatre, and the Feminist Studio Workshop at The Woman’s Building in Los Angeles. She co-founded the collaborative performance art groups Feminist Art Workers and Sisters of Survival. Her current work includes video, installation, artist’s books, and public art, and has been exhibited in galleries and museums nationwide. She has received recognition from the National Endowment for the Arts, California Arts Council, California Community Foundation, and the Rockefeller Foundation, among others.

“Having grown up near the mighty Mississippi, that concrete ditch called the LA River seemed a pitiful sight. Yet as I learned more about it I began to feel for its loss. It had once been a dreamy flow overhung with trees and stocked with fish. It had nurtured tribal people but baffled the early settlers with its unpredictability. The coyote story is a metaphor: Our human-made roads, freeways, and train tracks come and go, but the river is always there.”

Roberto Delgado received a Master of Fine Arts from UCLA. He was the recipient of a Brody Arts Foundation Grant, and earned two coveted Fulbright Fellowships in 1996 and 1987. His murals investigate the esthetics of color and form framed within the politics of the human condition, and can be seen in numerous cities across the US, including: the Hartsfield International Airport in Atlanta, GA; the Federal Courthouse in Pocatello, ID; the North Carolina A&T State University in Greensboro; at Lincoln High School, the LAPD Training Center, and in other Los Angeles area locations. His paintings and drawings have been exhibited in galleries in Alaska, France, Mexico, Scotland, Germany, Costa Rica, and South Africa.

“The neighborhoods surrounding this station have always been and probably will continue to be Mexican. The plaza in Mexican culture is a place where people gather, and in this station it is a place where Mesoamerican and local history are combined to make a distinct ‘place.’ From photographs of local inhabitants to the Talavera tiles, from elements of the Aztec and Mayan cultures to limestone from Jalisco, this station represents the determination of a people, and a confirmation of the longevity of their culture.”

Paul Polubinskas holds an Associate of Arts degree from Albany College, and is a ceramic arts fabricator. He assisted in completing the fabrication and installation of the artwork for this station.

Teddy Sandoval received his Bachelor of Arts from Cal State Long Beach. His work has been exhibited in galleries throughout California, Arizona, Texas, Colorado, New Mexico, Illinois, Michigan, Florida, and Washington, DC. His work was included in the Color Xerox Show in Calgary, Canada, in American Pop Culture Images Today in Tokyo, Japan, and in Viva la Frida: Fridomania at the Diego Rivera Studio Museum in Mexico City. Teddy died in 1995 after completing the design concept for the station.

“Los Angeles is one of the world’s most exciting and culturally diverse cities in which to live. I have experienced many of its pains and joys as this city has grown and improved over the years. Some of its major setbacks have contributed to creating some unity within the communities by improving communication among neighbors and eliminating a few more stereotypes.” – Teddy Sandoval

“As Teddy’s partner of 18 years, I worked to carry out his thoughts and ideas about the project after his death in 1995. The vision he had for this station was that it would become the ‘Gateway to Highland Park.’ When people depart the train at this station, they will realize that they have arrived at a very special place.” – Paul Polubinskas

Jud Fine received his Master of Fine Arts from Cornell University in New York. He has been the recipient of many awards, grants, and fellowships. His artwork has been exhibited and collected in museums and galleries throughout the world. He often collaborates with artist Barbara McCarren. Both individually and as McCarren/Fine, his recent art commissions include: Split Mound, an earthwork for the San Francisco Zoo; Modestopo, the Civic Plaza of Modesto, CA; Eureka, the lobby of the California State Department of Education Building, Sacramento; Mark, a linear narrative for the Ventura River Trail; and Maiz, an interactive landscape for Cesar Chavez Park, Long Beach, CA.

“This station represents an environmental merger of design, function and setting. Its plaza is grounded as neighborhood ‘home’ before the journey takes one beyond the station. The community in which it is sited is unique, meriting underline, not imposition. The total work is an interlacing of physical moments that function as a poetic foundation and simultaneous overlay, connecting links to a pattern at once elusive and apparent.”

Beth Thielen received her Bachelor of Fine Arts from the School of the Art Institute of Chicago. Her work has included unique experimental book forms that represent her interests in the developmentally disabled, individuals with Alzheimer’s, and incarcerated youth and adults. Her works are included in museums, libraries, and private collections worldwide. She was the recipient of artist-in-residence grants from the California Arts Council and the Blue Mountain Center in New York.

“I used five iconic images throughout the alignment to visually connect the stations. The images reflect an understanding of place, identity, and the commonality of the region. When you create public art you are engaged in a cooperative relationship with members of the community. Creating cultural landmarks provides an opportunity to present a portrait of the community, and to evoke local pride.” For any other inquiries regarding the Los Angeles to Pasadena Gold Line please visit Metro.net.

In 1781 along the banks of a beautiful river, early Spanish settlers established a new town, El Pueblo de Nuestra Señora la Reina de Los Angeles. On April 4, 1850 new U.S. settlers renamed it the City of Los Angeles. Today it is the center of a vast metropolitan area of more than 10 million people, the second largest U.S. city in population and one of the largest in area. Its robust economy is based on shipping, industrial, communication, finance, fashion, and it is a distribution center for the Western United States and much of the Pacific Rim. It is also the motion picture, television, radio, and recording capital of the United States. Downtown Los Angeles is home to the Los Angeles County Museum of Art; the Museum of Contemporary Art, and a vast array historical, movie, industry, and science museums and the University of Southern California. The Music Center’s four theaters house the Center Theatre Group, the Los Angeles Opera, and the Los Angeles Master Chorale. And the striking new Frank Gehry designed Walt Disney Hall is the home of the Los Angeles Philharmonic and is one of the most acoustically sophisticated concert halls in the world. In sports, the city is known for the Los Angeles Dodgers baseball team, the L.A. Clippers and L.A. Lakers basketball teams, and L.A. Kings hockey team.