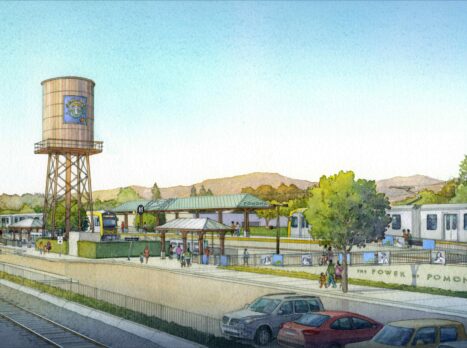 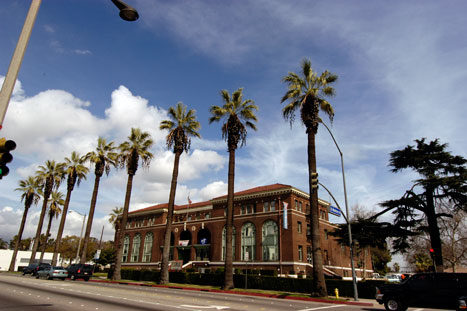 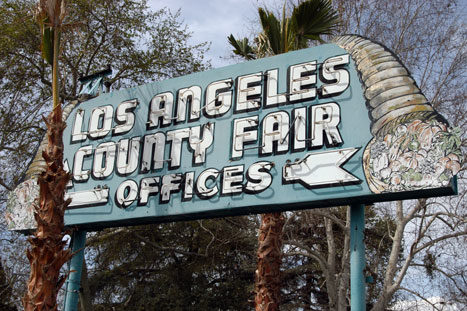 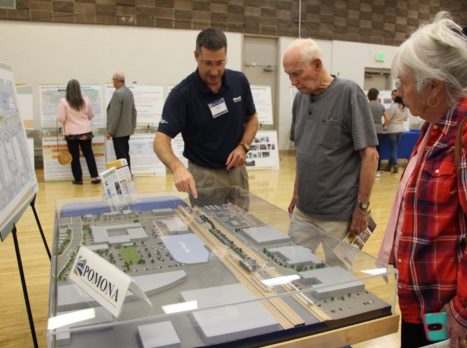 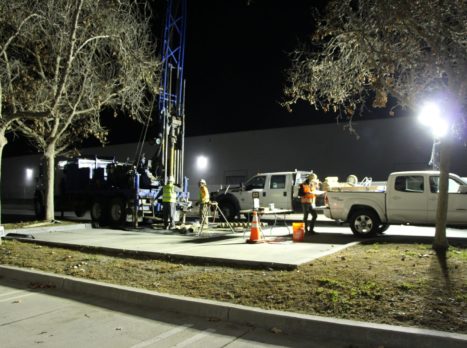 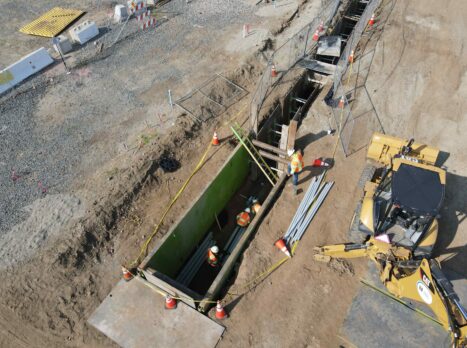 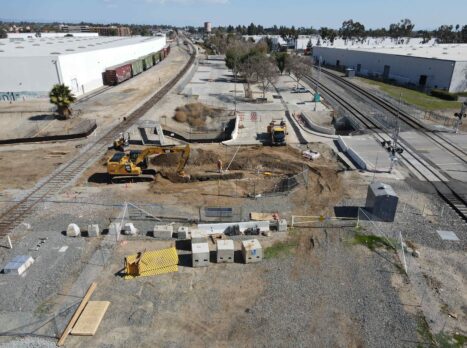 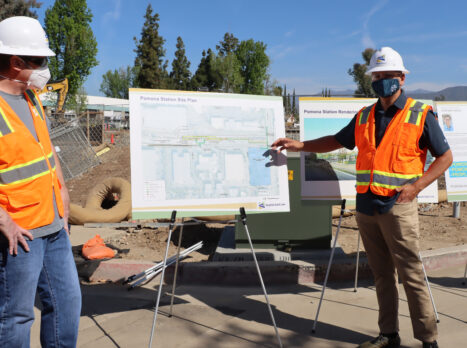 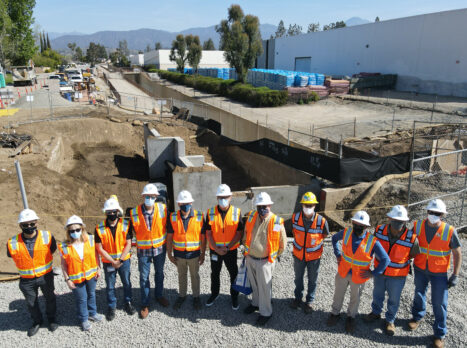 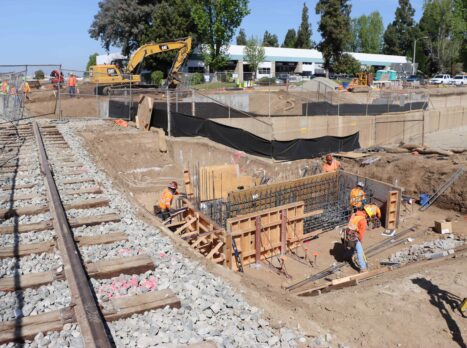 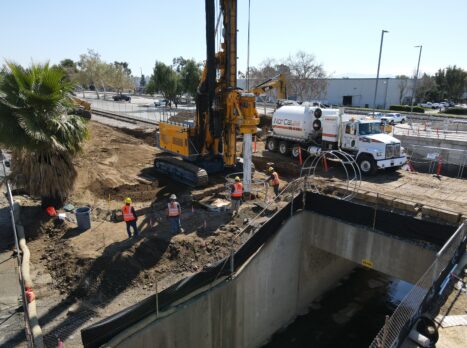 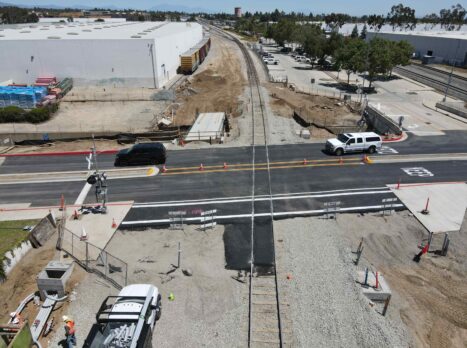 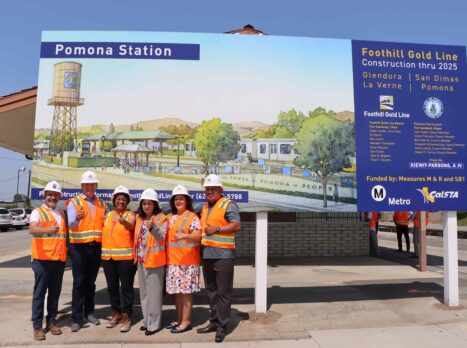 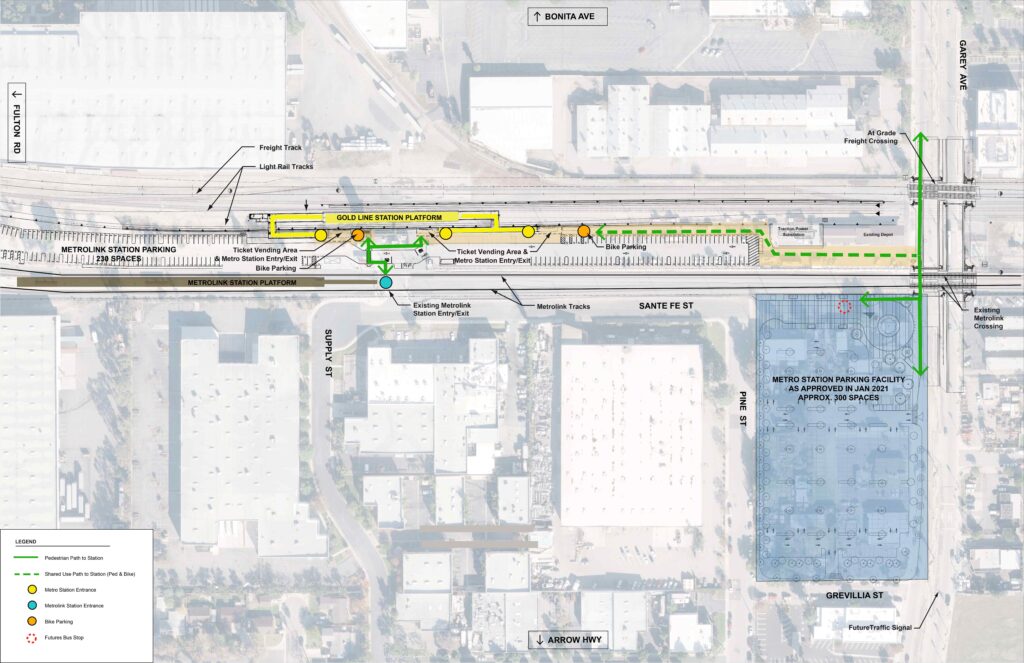 The Pomona station is part of the Foothill Gold Line from Glendora to Montclair, and will be located west of Garey Avenue and east of Fulton Road, northeast of the existing Pomona North Metrolink station. The Gold Line station will be a center platform station, with tracks on either side (one for westbound and one for eastbound trains). Access to the Gold Line station will be from both east and west ends of the platform, and a pedestrian walkway is planned to provide circulation between the two transit systems. A shared parking facility will be built to serve the stations and provide charging kiosks for EVs, bicycle parking and bus and drop off areas.

Once completed, four and five tracks will run through the city of Pomona (depending on the location in the city). Tracks will run in two separate rail corridors – one on the north for the Gold Line and freight, and one on the south for Metrolink and freight. While Gold Line trains and freight trains share the northern corridor, they will not share tracks. Therefore, the freight tracks that currently run in the middle of the north corridor will be relocated to the northern half of that corridor, to make room for the Gold Line tracks to be built in the southern half. The Metrolink/freight corridor on the south will remain as is today and is not part of the Gold Line project.

Permanent changes will also occur due to the project, including safety enhancements at all street crossings (raised medians, red curbing and turn restrictions within 100 feet of the rail corridor at all street crossings), relocation of the freight track to the northern half of the rail corridor, new fencing and walls along the entire rail corridor, and new overhead lines to power the Gold Line system. Additionally, the California Public Utilities Commission has required changes to the Pomona North Metrolink Station access from Fulton Road; restricting turns to right-in and right-out in the future.

The currently fully funded project only includes the station area and everything west of Garey Ave. As part of the currently unfunded extension from the Pomona Station to Claremont and Montclair, new light rail bridges (for the Gold Line only) will be built over Garey and Towne Avenues once funding is secured to build to Montclair. At this time, these bridges are not part of the project under construction.

A native of Pomona Valley, Stephen Farley is an accomplished artist based in Tucson, Arizona. He has an extensive resume of community-based public art projects across the U.S. His current work includes creating varied art features at the two main light-rail stations in Downtown Phoenix. He invented a new process for translating photographs to ceramic tile called tilography, which he has used for two four-story murals at the One University Government Center in Broward County, Florida, and 18 large vertical murals at the Gardner Community Center in San Jose, California.

Stephen graduated from Williams College in Williamstown, Massachusetts with a B.A. in political science. He studied abroad his junior year at the American University in Cairo, Egypt.

Based on his preliminary design concept, Stephen was selected by the city of Pomona’s Station Design and Art Review (SDAR) Committee, later ratified by the city council, in 2005. As the Foothill Gold Line from Glendora to Montclair continues to move from planning to reality, Stephen has taken his preliminary design concept and work with the SDAR Committee and Pomona community, and advanced the design to be incorporated into the project’s construction.

Who inspired you? For whom are you grateful? Who changed your life? Other cities have a hall of fame – the Pomona Station will be a Hall of Gratitude. This is the station art plan by the city-selected artist for the Pomona Station, Stephen Farley.

This project is designed to connect Pomona to its past and its future, generating a renewable source of people power for positive transformation of the entire community. Examples could be: “Gabe showed me the power of courage,” and “Janelle showed me the power of love.” Approximately 30 to 50 people and statement pairs will be included within the station area. The artwork will be fabricated on 2’x2’ arrays of 6” glazed ceramic tile, using the Tilography process. Text showing the power of these people will be exhibited alongside images of the final selected group of individuals.

Stephen Farley has gathered images and stories over the last few years and has created a website with more information about his station art program. To view submissions or to learn more, go to www.pomonapeoplepower.com.

During 2006-7, the Construction Authority worked with the City of Pomona (along with all other Foothill Gold Line cities from Pasadena to Montclair) to explore their visions for integrating transit oriented developments (TOD) near the future stations. The Construction Authority and city began a new dialogue through another TOD study in 2010, which revisited the earlier concepts following the economic downturn. In 2016, the Construction Authority measured the progress of TOD implementation since the first segment of the line opened for passenger service in 2003, including reviewing the potential TOD that could take place near the stations looking forward. Click here to learn more about the TOD Studies.

Long recognized as a major center of the citrus industry, the City of Pomona was actually named after the Roman Goddess of Fruit. Today, Pomona is entering its 3rd century as one of the major cities in Southern California, having first been incorporated in 1888. From its agricultural beginnings as a prime citrus product provider, to its development as a major railway and freeway corridor, Pomona has been a quality location for people to live and work for well over one hundred years.

The city is well known as the home of the LA County Fairplex, that welcomes more than a million visitors every year to the County Fair, among many other cultural and learning events. It is also home to two prestigious universities – California Polytechnic University at Pomona (one of two polytechnic universities in the California state system) and Western University of Health Sciences (one of the largest graduate schools for health professions in California). Today, the city prides itself on its history, diversity, community partnerships and commitment to continuous improvement in services for all residents and businesses.